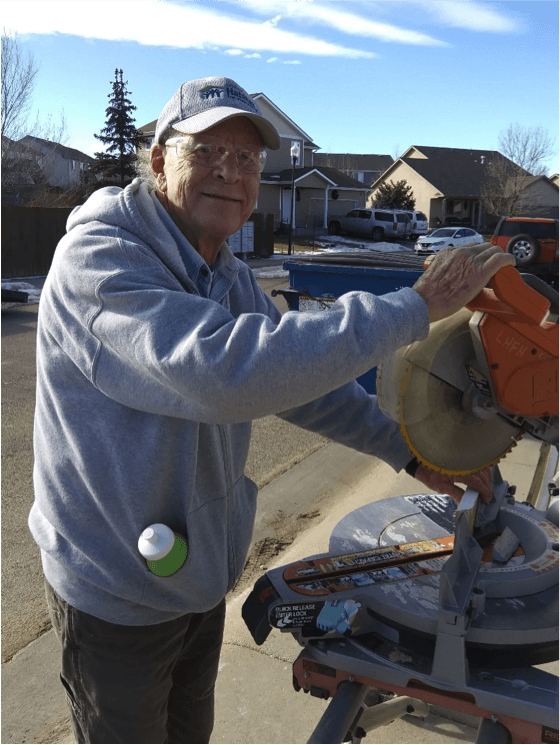 This month, we want to highlight a Habitat hero who is part of our core construction volunteers and a donor that is a part of the Carpenters Club, Chuck Reynolds. Chuck first became involved with Loveland Habitat for Humanity when retired in 2005. While he was working as a Product Marketing Specialist at HP, his friends encouraged him to volunteer with Loveland Habitat, but was too busy before he retired. However, the very next day after he retired, Chuck joined the construction crew and has been a part of the core “regular” volunteers ever since.

Chuck says that when he began volunteering with Habitat, he was also starting to build a cabin on land in Glenhaven, CO. He says that he would ask questions and take the skills that he learned on the construction site and apply it to building his cabin. Two years later, his cabin was complete and now, he says, he volunteers to pay back what was given to him. Chuck has been one of the longest core “regular” construction volunteers. He says that even though he is retired, the construction team & regulars are his new work crew and loves the comradery of the group. Chuck jokes in saying that he hopes to be able to build with Habitat for Humanity as long as Jimmy Carter has. Chuck says to anyone who is newly retired to try Habitat for Humanity, “If you like working with your hands and building a variety of things from basic structure up to finishing, then Habitat is a great place to go. Everybody is friendly and fun. We tease each other, have fun, and work together. It is a great place to work and meet other people.”

Furthermore, Chuck and his wife, Sandy, have been members of the Carpenters Club, which is Loveland Habitat’s monthly giving program, since it started in 2017. Chuck says that he joined the Carpenters Club to provide financial support, as well as volunteer, to support Habitat’s mission. He says that it is an easy way to make a difference year-round and it is neat to be a part of the club.

Chuck and Sandy are also big supporters of other local non-profits. Chuck is a volunteer firefighter and Sandy is on the board of the public library. When they aren’t volunteering in the community, they like to spend time at their cabin & cook.

Chuck, we can’t thank you enough for your years of service and support that you have provided to Loveland Habitat for Humanity. The lives you have touched and the homes you helped build are evidence of your impact in the community. Thank you from Loveland Habitat!